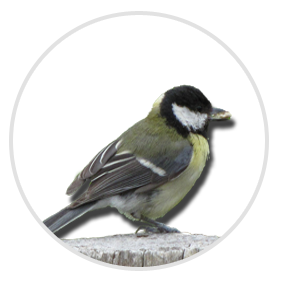 This bird is the largest European tit and is about the size of a House Sparrow. The Male and Female can be told apart by the width of the black strip down the breast. The Male has a more broader strip than the female.

They are common in most of the UK, apart from the Orkney & Shetland islands.

The latin name for a Great Tit is Parus major. There are about 1.6 million breeding pairs in the UK, with continental birds coming over during the winter.

Great Tits are on the RSPB Green List, meaning there is no identified threat to the bird’s population.

They mostly feed on insects, spiders, seeds, berries, beach mast and caterpillars of moths. Their diet changes through the year when other resources disappear, and others become available.

Great Tits will nest in any hole in a tree, wall or nest box.

Breeding starts in mid April with clutches of around 7-15 eggs. Incubation takes around 10-22 days and the young leave the nest within around 22 days of hatching. The nest is made from moss, grass and down and is lined with feathers or hair.

The egg is 18mm by 14mm, making it the largest egg of the British tits. The female is the only bird to incubate the eggs, whilst the male feeds her.

During the colder months some Great Tits may return to a nestbox and use it as a roost for the night.